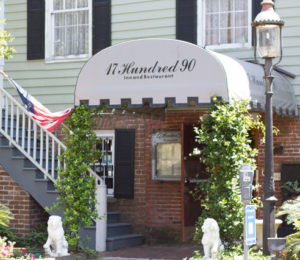 Following the American Revolution and independence from England, the first free election of a mayor, city council and the formation of a Savannah city government occurred in 1790.

Savannah was a small village with a few hundred frame buildings, sandy streets, horses and wagons, and a simple, yet prosperous life.  Celebrating that heritage, the 17hundred90 Restaurant and Inn is one of Savannah’s oldest restaurants and Inns offering fine dining and comfortable lodging.

The restaurant and Inn are housed in what were originally three separate residences.  The western part of the building was built as a duplex between 1821 and 1823 by Steel White; the smaller eastern section was built by the Powers family in 1888.  The ground level with its slate floor and soft brick walls are thought to date from a previous structure possibly destroyed in the great Savannah fire of 1820.   Original wood shingles are visible in the attic and wooden pegs and wedges holding beams in place can be found throughout the building.

The Inn also has 14 Comfortable rooms, each with king or queen sized bed, private bath, a growing collection of antiques and ghosts waiting to tuck you in at night.

The 3-story Guest House which is located across the street on York was built in 1875.  A Norwegian shipbuilder who was living there in the 1890’s is believed to have hand-painted the parlor ceilings to help cover the cost of rent.

But the best part of 17hundred90 is the long tradition for fine dining and tasty drink.  Fresh seafood, carefully prepared steaks, lamb and chicken and southern vegetables combine with fine wines and carefully mixed cocktails to make a delightful dining experience.

The Chart House restaurant is located on the active Savannah River waterfront.  The building was built before 1790 from an unusually diverse array of stones, originating from ballast in the holds of sailing ships arriving in the Port of Savannah.   Ships coming with little or no load would take on stones as ballast, and they would dump those stones as they took on loads in Savannah.  These stones, probably from Africa or the Caribbean, were valuable building resources, because the sources of solid rock near Savannah are many miles inland across the sandy Coastal Plain.  In the past the building has served as a warehouse for sugar and cotton and now is home to one of the most spectacular waterfront restaurants in the city.

Chart House seafood restaurant might be an exquisite piece of Georgia’s southern history, but their style is anything but old fashioned.  Newly remodeled interiors give the restaurant a sleek, modern feel while embracing its historic charm and claim of being “the oldest masonry building in the State of Georgia”.

Set against the backdrop of the pristine Savannah River and located among the hottest spots of Downtown Savannah, its sprawling patio is a lovely setting for afternoon weddings or a relaxing Happy Hour on the river. The view of the 4th-busiest port in the nation is unmatched, and the same goes for the food. The menu features southern Low Country twists on seafood classics as well as its legendary Prime Rib.